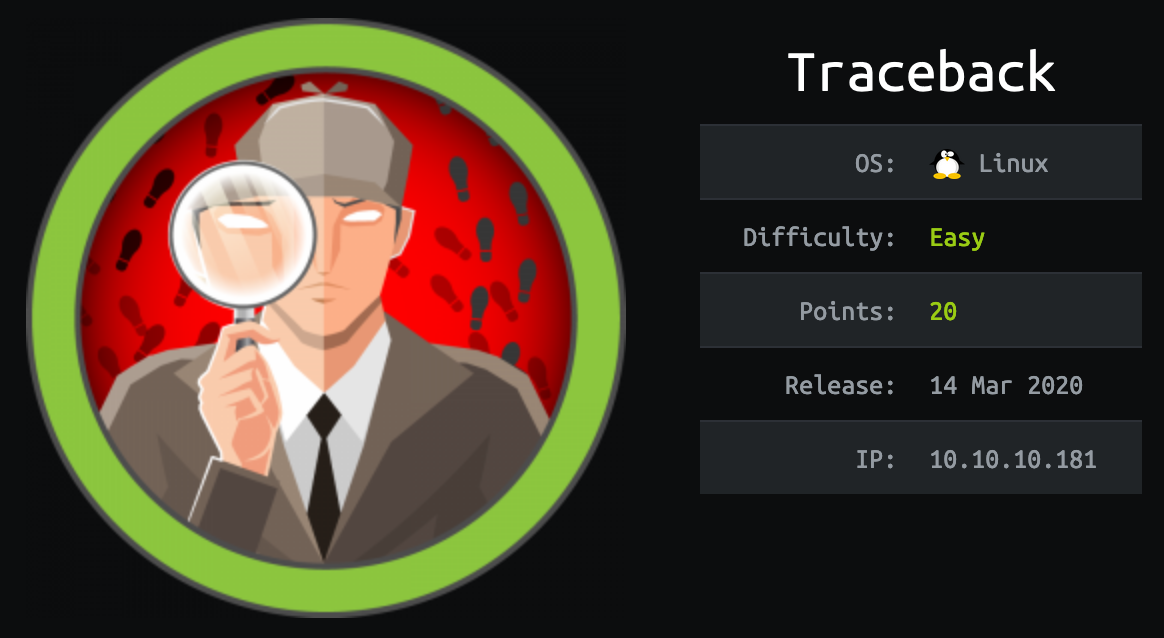 Traceback just retired on Hackthebox, it’s an easy difficulty Linux box. This one is quite straightforward box if you are familiar with CTF. It exploit a similar misconfiguration we saw previously in the Writeup Box. I wouldn’t recommend it for total beginner since the frequent reset resulting in lot of users working on it, and exploit conflicts can be frustrating to progress on.

Tl;Dr: The user flag consist in retrieving and exploiting a web-shell planted by a hacker on the web-server of the machine. From there you pivot from webadmin to sysadmin using a Lua interpreter running as the said user.
The root flag could be grabbed by exploiting a misconfiguration of /etc/update-motd.d/ folder permissions allowing the user to edit scripts run as root by run-parts at login time.

From what we can see here the website seems to have been hacked. The malicious actor indicate he/she left a backdoor open.

That’s a nice hint… If we can find this backdoor we can use it without needing to find the exploit by ourselves.
With that in mind let’s try to find more informations.

When we check the code source of the page we notice an interesting comment:

Googling Some of the best web shells that you might need return a Github repository with the exact same text as description full of webshell. Our hacker used one of those for sure.

From here we could write a little script that get the shells list on the git repository and to test each shell in the url to find which one if is present on the server but…. since there is only 15 let’s just copy paste by hand ;)

We got on the right idea, opening http://traceback.htb/smevk.php display this login page: 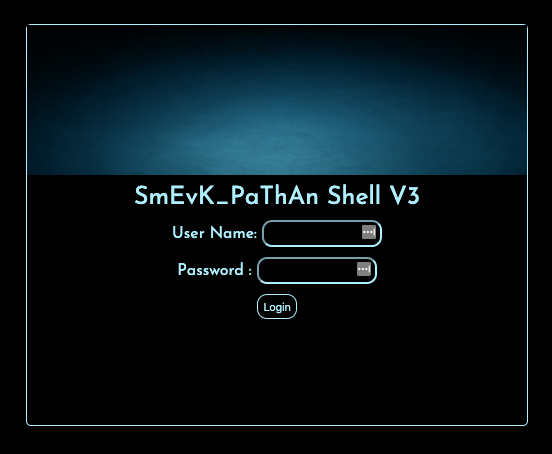 Checking the shell source code on the previous Github repository informs us that the defaults credentials are admin:admin. Let’s try:

Let’s try not to focus too much on the design here.

The shell allow include a command injection tool, but it’s far from being practical. The easiest way to progress from here is to open a reverse shell using the web shell. We can use for example a Python one:

Once we have created our reverse shell we can use the Web Shell to upload it to the server:

And we get our connection:

We now have a shell as webadmin user. Let’s now do a bit of recon on this user files available on the box:

Alright we have a little more information here. We will need to pivot to sysadmin user and this one gave left a note leading to a tool about practice Lua.

Since we don’t know where is the tool to practice Lua that sysadmin talk about let’s continue our classic recon process for the moment.

When checking for informations on sudo we stumble upon an interesting NOPASSWD entry:

We can run the following command /home/sysadmin/luvit as sysadmin without having to use password.

Let’s open this luveit to see what is it about:

Luvit implements the same APIs as Node.js, but in Lua!
This helps teams migrate without having to learn a new way of programming.

So if I understand correctly it’s a Lua interpreter including the same APIs as Node.js.

Since it’s able to run Lua and Node.js as sysadmin it very possible we have write abilities on sysadmin home folder. And we know that arbitrary file write definitely lead to privilege escalation.

A common approach to privilege escalation using file write is to add our public SSH key to the ~/.ssh/authorized_keys file.

Note: Don’t forget to open the authorized_keys file in append mode (a) to not overwrite the actual config or the keys of other players that potentially used the same trick.

Let’s run it to check if it works as intended:

The first thing we notice when login to sysadmin account is that our hacker didn’t only drop a webshell on the server but also modified a few files. For example this custom message on login time:

Let’s search on the system for xh4h to see if our hacker dropped some interesting other files:

Let’s focus on this 00-header in update-motd.d folder. For those who are unfamiliar with motd here is a reminder of what it does:

The contents of /etc/motd are displayed by pam_motd(8) after a successful login but just before it executes the login shell.

The abbreviation “motd” stands for “message of the day”, and this file has been traditionally used for exactly that (it requires much less disk space than mail to all users).

Let’s see what we have on this server update-motd.d:

First thing that catch the eye here is that all those file belong to sysadmin group, meaning we, as sysadmin user can read, write and execute them even though we are not the owner.

Alright, now how are those files executed to end up being displayed at login time ?

If you are familiar with Debian you may know about the run-parts utility:

run-parts - run scripts or programs in a directory

run-parts will run all the scripts in a given directory. It’s very useful in a lot of scenarios. For example it’s used in Debian to dynamically generate a Message Of Day (MOTD) by combining all the output of scripts present in /etc/update-motd.d/ folder, like so:

And this is done at login time as root.

See what’s the issue is here ? We are able to edit file that are going to be run as root.

Let’s now use this knowledge to escalate our privileges to root.

To exploit this misconfiguration we could have used the same trick as before to add our SSH key to root user .authorized_keys file. But let’s change a bit and open a reverse shell this time.

First, we open our netcat listener:

Then let’s edit, for example, 00-header to add a command to open our reverse shell:

Now next time we login, our reverse shell will be executed as root. Let’s give it a try by logout of SSH and login in again:

At this moment, our connection as root open:

As always do not hesitate to contact me for any questions or feedbacks :)